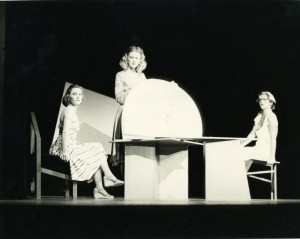 Paying A Visit To Mary Part 1 and Part 2 take as their cerebral anchor the 1977 play Iglu by Guy de Cointet and Robert Wilhite. Iglu contains invented languages, where sounds become words, gestures are sentences; where the actors (sometimes even switching gender) mostly understand one another not because they use words as we do, but because it seems they have agreed to agree. Agreed to agree on meaning; thereby shifting conventions and signs to a different communicative plain.

Iglu premiered in Los Angeles in 1977, after which the videotapes of this first and only performance mysteriously disappeared. For years Iglu lived on through the recollection of the artists, the actors at the time, and the audience that evening—until now.

Two young and intelligent women are on a brief vacation in West Los Angeles, their hotel room, with windows overlooking the hills and Southern California.

The furniture is quite simple but…

About Paying A Visit To Mary Part 2:

The American visionary, designer, architect, author, and inventor, Buckminster Fuller (1895–1983), stopped speaking for two years at the age of 32 because he said he didn’t want to go on simply repeating what he was taught. Instead of communicating by rote, depending on automatic responses, he stripped himself of his inherited ‘sign equipment’ or ‘fixed props’ and re-booted his system to say what was needed, when it was needed.