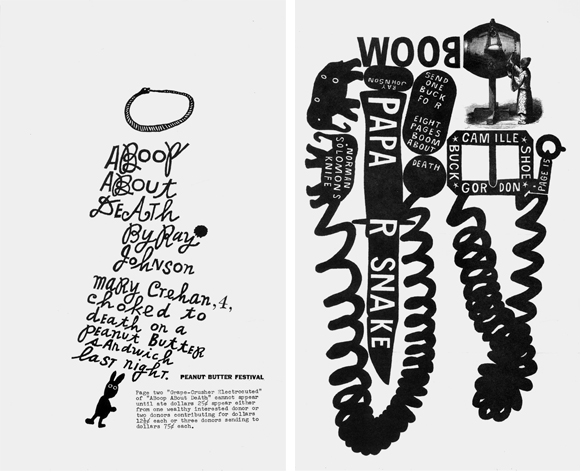 Ray Johnson’s (Detroit, 1927) early work consisted of intricately painted geometric abstractions influenced by Albers’ color theories, and he exhibited with the American Abstract Artists group, including Ad Reinhardt and Leon Polk Smith. Soon, however, he turned to complex collages combining images with ink and paint or other surface textures that reflected the atmosphere of Abstract Expressionism then still prevalent in New York. During the 1950’s, Johnson established the format and style he would continue to use throughout his life. Kindred in spirit to the work of Joseph Cornell, he called his small irregularly shaped collages “moticos”, an anagram for “osmotic” (from osmosis). Johnson’s works continued the Dada and Surrealist tradition of collage (including that of Kurt Schwitters and Max Ernst) and pursued the provocation of paradoxical verbal and visual puns, absurd juxtapositions, word-play riddles and hidden references with a witty nihilistic sense of humor.

Johnson wrote poetic texts and letters and integrated language and a unique system of cryptic signs into his work. Considered by many the “father of Mail Art”, as early as 1953 Johnson began sending highly conceptual images/texts to friends, often encouraging the recipient to “add to” the work, or “please send to” someone else, or “return to Ray Johnson”. Forming the “New York Correspondence School” in 1962, Johnson established an enormous network of participants throughout the world – one which remains active even after his death, as is evident with Ray Johnson web sites on the Internet. Paralleling the idea of Allan Kaprow’s Happenings and of later Fluxus events, in the early 1960’s he began doing “Nothings” – informal performance art or non-art pieces which were continued over the years under the guise of NYCS meetings or lectures. Johnson was recognized as much for his performance-like persona as his collages and mailings.

In 1968, on the day Andy Warhol was shot, Johnson himself was mugged, an event which precipitated his move to Locust Valley, Long Island. Although he remained involved with the art scene through conversations and correspondences, he gradually withdrew from actively exhibiting. Johnson continued to make art, however, such as the master collages he worked on over a period of many years. He also continued to perform in his own circuitous ways, until apparent suicide on the night of Friday the 13th of January, 1995, when he was last seen leaping off the bridge in Sag Harbor, Long Island doing the back stroke into oblivion, and act some consider to be his last “performance”.

Between 1963 and 1965, Ray Johnson printed thirteen pages of his Book about Death with the Pernet Printing Company, 120 Lexington Avenue at 28th Street. His title, which designated the thirteen unbound pages as a book, is A Book about Death, yet also A Boop about Death and A Boom about Death. Those thirteen photo-offset pages were re-printed in 1976 for a catalogue, Correspondence, North Carolina Museum of Art, Richard Craven, editor and curator. The Carolina pages were folded once from the bottom, hence are not quite like the pages Ray folded for envelopes. 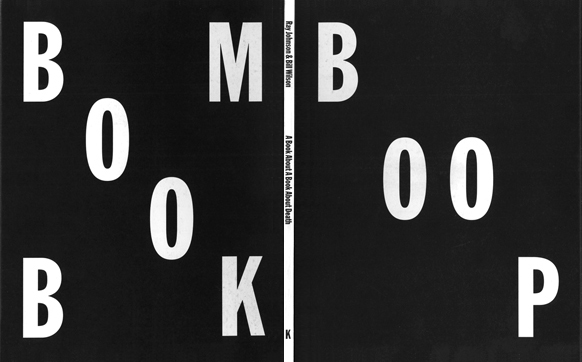 The presentation at Kunstverein will include a publication by Bill Wilson, which elaborates on each of the pages of “A Book about Death”.

Kunstverein would like to thank The Estate of Ray Johnson represented exclusively by
Richard L. Feigen & Co.